On the night of April 11, 1912, a mighty ocean liner steamed straight into an iceberg in the icy north Atlantic. Passengers were thrown from their chairs and rushed in terror to the decks. Although her bow was badly buckled, however, no one was hurt, and the ship limped onwards, to reach New York in safety.

The clue there is in the date, for the ship in question was a French liner, the Niagara. It was three nights later that the Titanic met her fate near the same spot.

So why did the Titanic, despite warnings of ice ahead, hit an iceberg herself, and why did she fail to survive the collision? The basic answer is clear: she was going too fast. The conclusion of the official British inquiry remains self-evident. However far away the iceberg was when the lookouts saw it – their testimony was evasive to say the least – there was too little time to avoid it.

It’s often suggested that Captain Smith was trying to set some sort of speed record. He could never have captured the Blue Riband for the fastest-ever Atlantic crossing; the Titanic simply wasn’t built to outpace sleek rivals like Cunard’s Mauretania. Smith knew however that for the Titanic to arrive ahead of schedule would attract favourable publicity, and the presence on board of White Star chairman J. Bruce Ismay may well have spurred him on. In fact, though, it was standard practice for liners to race at top speed through the night, and only take evasive action if confronted by an obstacle. 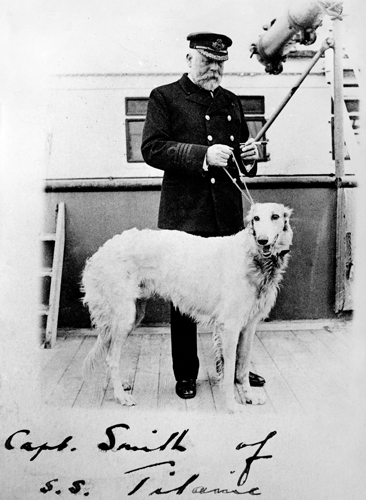 Not that it was freakish bad luck for an iceberg to be in the Titanic’s path. While icebergs were not usually expected that far south, the sea that night was full of them. When the sun rose the next morning, “dozens and dozens” were in sight. Even more to the point, barely three miles ahead the ocean was covered by a colossal unbroken ice field, seventy miles long by twelve miles wide. And the Titanic had been warned, by wireless messages from nearby ships.

When First Officer Murdoch, on duty on the bridge of the Titanic, did take evasive action, he did entirely the wrong thing. His attempt to steer around the iceberg, while throwing her engines into reverse, producing the nautical equivalent of a skid. As the leading manual on seamanship, Austin M. Knight’s Modern Seamanship, advised, “this course is much more likely to cause collisions than to prevent them”. On top of that, there’s plausible evidence that the helmsman initially turned the ship’s wheel the wrong way, losing crucial seconds.

Had the Titanic hit the iceberg head-on, she would probably, like the Niagara, have survived. Instead, she scraped along the side of the berg, which had the twin effects of slicing her open, and weakening the rivets that joined the plates of her hull, which effectively “unzipped”. Her much-vaunted watertight compartments had been designed to protect her against sharp impacts; no one had considered the effects of a prolonged scrape.

So what was to blame? Rather than the very existence of the iceberg, or the unusual conditions that made it hard to spot – hazards the world’s greatest liner should have been able to cope with – it seems fair to blame the design of the ship, and the inadequate response of her crew. And to add a special word of condemnation for J. Bruce Ismay, the man who decided not to equip the Titanic with enough lifeboats to rescue everyone on board.

This photo shows the Titanic and her sister ship, the Olympic, under construction at Belfast’s Harland & Wolff shipyards in 1910.

The White Star Line first announced the names of the two ships on 22 April 1908. The impetus for naming the Olympic seems obvious – it was just five days until the opening ceremony of the 1908 Olympic Games in London.

In fact, the name officially referred to the Greek gods of Mount Olympus – the pantheon of Zeus, Hera, Aphrodite, and so on. In Greek myth, those gods came to power by subduing the mighty immortal Titans, who had ruled in the preceding Golden Age. Hence the name Titanic.

The Olympic and the Titanic also had a younger sister, work on which had barely started when the Titanic went down. Despite subsequent denials, historians generally agree that this third ship was originally destined to be called the Gigantic – in Greek mythology, the Giants, or Gigantes, were yet another race of gods, who staged a revolt against the Olympic gods in the hope of reinstating the Titans.

The name Gigantic was quietly dropped after the disaster. In 1914, with jingoism seeming a better bet than hubris, the third ship was launched as the Britannic.

Every White Star ship, incidentally, was given a name ending in –ic, whereas the ships of their big rivals Cunard ended in –ia; thus Mauretania, Lusitania and so on. Previous White Star vessels had included the Traffic, the Magnetic, and the Arabic.

When RMS Cedric was launched in 1903, she was, like the later Titanic, the largest ship in the world.

You have to wonder whether the sinking of the Titanic would be quite so well remembered had disaster befallen the Cedric instead. Does James Cameron’s Cedric in 3D have quite the same ring?

Rough Guide to the Titanic

Published by Penguin in 2012,
this 288-page book tells the Titanic story from drawing board to disaster, and covers her afterlife in myths, music and movies.

All e-books now HALF PRICE.